iPhone 8 deals: should you buy one or steer clear?

iPhone 8 deals keep getting better... but how?

You can now find an iPhone 8 deal for less than $200, and quite frankly, that's a steal.

But the iPhone 8 wasn't always this cheap. As a matter of fact, upon its release in 2017, prices of the iPhone 8 started at $699, and if you wanted a version with more storage space, you would have to shell out considerably more. The 256GB version was going for $849.

But what has changed? Why are iPhone 8 prices lower than ever before? Is it still a phone that you should consider buying? Read on to find out more about the iPhone 8 and its place in the iPhone product line.

As we said before, the iPhone 8 wasn't always this cheap. But it was always meant to be cheaper than its more expensive sibling: the iPhone X.

When Apple released the iPhone X with a $999 price tag, many said Apple had gone too far. Yes, the price of that phone was insane, but there was a reason for it. It was a lot harder to produce than iPhones before it because of its crazy full-body notched OLED display (which is still prevalent in today’s newest iPhones).

Regardless, some decided to pay the premium price tag for the iPhone X, while others decided to stick with the original Apple designs like the iPhone 8.

If you decide to buy a cheap iPhone 8...

If you decide to buy a cheap iPhone 8, one of the first things you’re going to notice is the stellar ergonomics. It just feels great in the hand. And that’s just the start of what this phone does really well.

The screen is great; you won’t be able to see the individual pixels. The battery life is good, it can last you a full day if you’re not a super heavy user.

Apps launch quickly, although you may notice that newer iPhones like the iPhone 11 or 11 Pro are slightly snappier.

As you can tell from looking at the price evolution chart below from our friends at CamelCamelCamel.com, the price of this phone has been steadily dropping for the last couple of years. 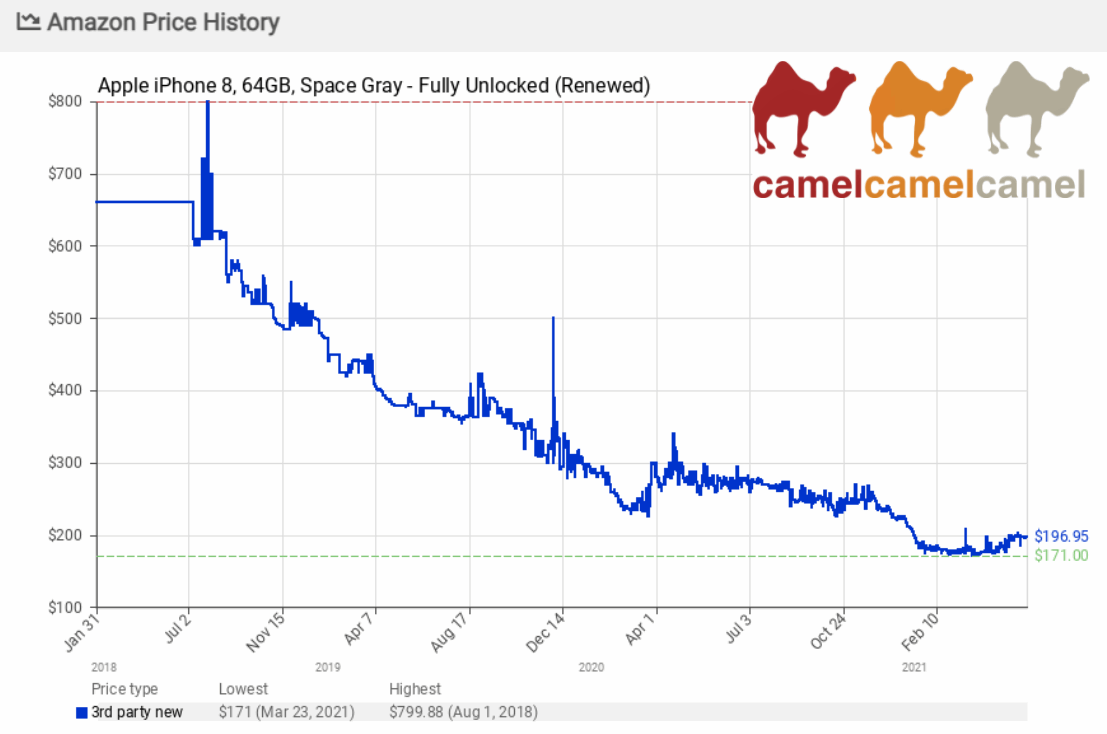 The price may be lower than ever, but does it still make sense to buy an iPhone 8?

Even though the iPhone 8 is already a few years old, it's still getting the newest Apple iOS updates. The iPhone 8 is expected to continue receiving this software support well into 2022 or even 2023.

So don't let the shockingly low prices dissuade you, a cheap iPhone 8 is still a good buy for anybody that wants an affordable iPhone.

The iPhone 8 will still be able to install all the newest apps as long as it's running the newest version of Apple iOS and will give you all the functionality that you'd expect from an iPhone.

Who should ignore iPhone 8 deals

Although there are a lot of great iPhone 8 deals out there right now, there are some who perhaps should skip over these offers and opt for a newer iPhone like the iPhone 11 or 11 Pro.

Even though you can expect the cheap iPhone 8 to get the newest iOS updates for more time, these updates will not improve camera or processor performance.

This means that if you're a gamer or photography enthusiast, a newer iPhone may be a better choice for your needs.