The "most advanced smartphones of all time," refurbished.

The most advanced paragraph title we've ever written.

From iconic turtleneck to less-iconic button-up, not much has changed at Apple. They make a big to-do about the new iPhone, while quietly pushing their previous “most advanced model ever” into the pit of obsolescence. We don’t roll that way. So, while you’ll have to hold tight before the iPhone 14 lands on Back Market, we’ve got every other "most advanced smartphone ever," available right now, for less. 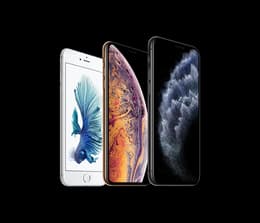 There’s no reason for older tech to go to waste. With BuyBack, you can trade in your Apple devices for cash, without the smoke and mirrors.
Try BuyBack 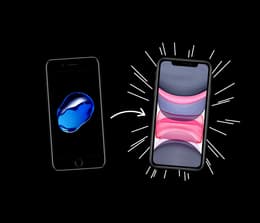 How to find the right iPhone for you

What is Apple Keynote?

The Apple Keynote event (not to be confused with PowerPoint’s best frenemy, Apple Keynote software) is the big kahuna of Apple events, where the company announces new products, redesigns, and innovations — like combining the charging port and the headphone jack 😉.

In order to create the perfect buzz, Apple keeps everything on the agenda under wraps. Except, of course, the theme (yes, just like your homecoming dance). This year’s theme of “Far Out” has sparked plenty of space-age rumors — but don’t expect Tim Cook to show up in a space helmet. He'll most likely be talking up the iPhone 14 since the company usually announces the latest iPhone in the fall.

When is the Apple Keynote event in 2022?

This event will take place on September 7, 2022 at 10 a.m. PDT at the Steve Jobs Theater, an amphitheater in Apple Park in California. Trying to snag a ticket? Alas, the event isn’t for us plebs. Tickets are not available to the general public.

How can I watch the Apple Keynote live?

You can watch a livestream of the event on the Apple Events page of the company's website or on the Apple TV app. But, if you’d like to make your own apple keynote à la mode at home, here's a great place to start.

How long does the Keynote event last?

Apple events usually last at least 1 hour, sometimes up to 2 hours. It depends on how much the company is ready to unveil  (like whether or not Apple Watch will come in lavender or in chartreuse). It’s estimated that the 2022 Apple Keynote will last about 2 hours.

What products will be presented at the 2022 Apple Keynote?

According to sources, Apple is likely to announce (drumroll please): the iPhone 14, new iPads, new Apple Watches, and the new AirPods Pro. But the new-new isn’t just served on the outside, Apple is looking inward this year as well. New processing chips for MacBooks (the M2 was already released in the MacBook Pro) are on deck.

The belle of the Keynote ball, the iPhone 14 and 14 Pro, will probably have a 48-megapixel main sensor, making its specs on par with a computer. (Computers: they keep getting smaller, and we just stay the same). iPads will probably get an upgrade too, from the M1 to the M2. And finally, the camera notch at the top of the phone may be changed to either a pill shape or a pill-shaped cutout… with a hole. What can’t holes improve?

In terms of specific features, it’s hard to say what might change (although hopefully, that charging port stays in the same place). But one thing is for certain. New models will most likely look exactly the same, with minor improvements, for a big ol’ price tag.

What are the release dates for the new iPhone, Apple Watch, iPad and MacBook?

Usually, all the new gadgets will end up on Apple’s website in early October, before making their way to Back Market 1 or 2 months later. But, like every year, the tweaks in the new iPhones usually are minor (but cost major cashola). So, if you’re looking for a new iPhone without that price tag, we’ve got iPhone 13 or an iPhone 12, all year round.