You've come to the right place if you're looking to get a great deal on an Apple Watch 4 for sale :) 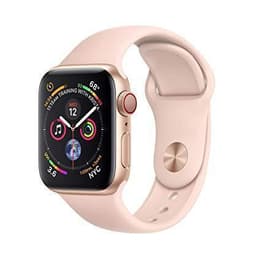 Average of 219 reviews from the past 6 months.

That's according to Tierra R. Love my new apple watch. It looks great and works perfectly. 1 week ago

Average of 219 reviews from the past 6 months.

4-5 stars 77%
3-4 stars 12%
2-3 stars 6%
1-2 stars 5%
Robert C. Bought: Apple Watch (Series 4) - Cellular - 44 mm - Aluminium Space Gray - Sport band Black 2 months ago
5/5
I made a mistake and tried another refurbish company because some how I could not get a code to enter when placing Back Market order. But I should have stayed patient. Received watch from another company, it truly looked like a used watch with big scratches and the watch did not work out of box. I ...


Clyde K. Bought: Apple Watch (Series 4) September 2018 - Cellular - 40 mm - Aluminium Rose Gold - Sport Band Pink 6 months ago
5/5
This will be my second purchase from this company and they have not disappointed! Shipping fast! Merchandise far exceeded my expectations for it to be refurbished. And no issues so far, nor issues with the phone company. Definitely will continue to shop them and highly recommended.


Leslie T. Bought: Apple Watch (Series 4) September 2018 - Cellular - 40 mm - Stainless steel Stainless steel - Sport band Black 5 months ago
5/5
I purchased the Apple Watch series 4 Hermes stainless steel version. It was in terrific condition and has performed like a champ since I first put it on my wrist. My experience with Back Market and this seller could not have been better. Price, timely delivery, and condition of product was all out...


Johnathon B. Bought: Apple Watch (Series 4) - Cellular - 44 mm - Aluminium Space Gray - Sport band Black 4 months ago
5/5
The watch came in super quick only a couple of days wait, the Apple Watch series 4 was in amazing condition and works flawlessly I’ve been wearing it non-stop ! 10/10 will be back to purchase other tech items from back market


Trevor P. Bought: Apple Watch (Series 4) - Wifi Only - 44 mm - Aluminium Silver - Sport Band White 4 months ago
4.8/5
This apple watch came without a single scratch. It came in and we were surprised at the quality. The charger wasn't Apple made, but it still charges the apple watch perfectly fine. No complaints here.

What is the Difference between an Apple Watch 4 and 5?

There really isn’t much of a difference between these two models of Apple Watch. The only real plus of getting a Series 5 over a Series 4 is the always-on display. So unless you need your Apple Watch to be constantly displaying the time, even when you aren’t looking at it, just go ahead and look for an affordable Apple Watch 4 deal on this page :D And although the used Apple Watch Series 4 doesn’t have an always-on display, it is able to accurately and reliably know when you are looking at your watch by sensing the movement of your wrist when you want to check the time.

Why was the Apple Watch 4 Discontinued?

What is the Cheapest Apple Watch?

Although there may not be a noticeable speed difference between these two models of used Apple Watch, I’ll go back to the point I mentioned previously about newer Apple Watches feeling better because of their updated exterior design.

Do I Really Need an Apple Watch?

The Apple Watch is really catered towards a niche audience. If you absolutely need to have all your notifications on your wrist at all times, or find yourself wanting control over fitness or heath metrics, then the cheap Apple Watch 4 from Back Market may be perfect for you!

Do I Need a Screen Protector for my Apple Watch 4?

If you go on forums like Reddit, most people report their Apple Watch 4 being able to resists deep scratches pretty well. Micro-scratches will still appear over time, but this is normal and you probably won’t need a screen protector for your Apple Watch 4 unless you work in a very harsh environment.

Get a Cheap Apple Watch 4