Our very best refurbished All Mac: 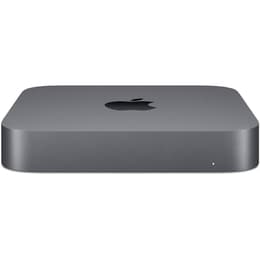 Average of 175 reviews from the past 6 months.

That's according to Abel G. Product good as described. Satisfied. Fast delivery. Appreciate the warranty for piece of mind. 4 days ago

Average of 175 reviews from the past 6 months.


Kunal G. Bought: Mac Mini Core i5 2.6GHz - SSD 256Gb - RAM 16Gb 1 month ago
4.6/5
I have been using it for a week and so far it's been pretty good.. overall condition on the mac mini is good. There were some scratches on the bottom of the mac mini . Which to me don't matter because it's hidden and moreover it's refurbished product so expect some minor dings😃


Mary ellen B. Bought: Mac Mini Core i3-8100B 3.6GHz - SSD 128GB - RAM 8GB - QWERTY 3 months ago
4.8/5
I am extremely happy with this refurbished Mac mini! It looks brand new, not a scratch or dent on it. I am using it as a media server for our collection of DVDs, to play them on our TV without a DVD player. It is working perfectly for that. I was pleasantly surprised that it came loaded with Mac Mo...


Jacob M. Bought: Mac mini (October 2014) Core i5 2.6 GHz - HDD 1 TB - 8GB 4 months ago
5/5
As a student I really needed something that was affordable and reliable for home use. This gave me both and with apple's updates to older models you can't go wrong with the refurbished ones as they work just like new!


Albert M. Bought: Mac mini (October 2012) Core i7 2.3 GHz - HDD 1 TB - 4GB 2 months ago
5/5
The Mac Mini works very well and is in excellent condition! I am glad I discovered Back Market. This was a great refurbished product, and I would easily recommend it to friends and family.

MacBook Air 2018 2015 HP Laptop ThinkPad T480 Dell XPS Laptop MacBook PRO 16 MacBook PRO 2012 MSI GF65 Thin MacBook PRO For Sale MacBook 2020 2019 MacBook Air
Every Mac
Macintosh or Mac is a series of different families of personal computers designed, developed, and sold by Apple. The first Macintosh computer was launched on 24 January 1984 and new versions and styles are delivered every year. Mac computers have loyal fans, and some say Macs are better than PCs. Apple stands out because it carries a limited product line, famous for their high-quality manufacture, performance, features, and design. Let's start the tour.
The iMac is a series of all-in-one computers designed and manufactured by Apple Inc. It is home-oriented (desktop) and all its models are characterized by integrating the CPU and monitor into a single device. Since the introduction of the first model in 1998, iMac has evolved through five different forms, all signed by Jonathan Ive, the famous industrial designer. This computer enjoys a relatively high popularity due to its aesthetics that sets it apart from other desktops on the market. The latest of the iMac is the best one ever put on a Mac, the first impression is a spectacle. The 5K panel vibrates the colors and it is now able to reach a maximum brightness of 500 nits. The iMac is capable of reproducing 1 billion colors and uses the P3 standard to provide greater precision in their reproduction.
MacBook Pro is a line of high-performance laptops from Apple Inc. which targets professional users. It is the successor to the PowerBook G4 model. The MacBook Pro is the company's first product line to include Intel processors, and was presented at the MacWorld 2006 technology fair on January 10, 2006. The Mac Pro is incredibly thin, lightweight, faster and more powerful than ever. It has the brightest and most colorful Mac notebook screen of all. In addition, it comes with Touch Bar, a glass bar with Multi-Touch technology built into the keyboard. The design is the same as that of the previous generation, as it is thought to last several years. The new Mac Book Pro changed the idea of Apple's high-end laptop since it is no more about equipment where power prevails over the most basic models, now exclusivity in functions matter a lot. The MacBook is a Macintosh laptop developed and produced by Apple. The MacBook was the successor to the 12-inch iBook and PowerBook as part of Apple's transition to Intel processors. The notebook was intended for the 'general public' and the educational world. The MacBook was withdrawn from sale on July 20, 2011, and until its last commercialization, it was the world's best-selling Macintosh. In the spring of 2015, the MacBook was reintroduced with a brand new design. The MacBook is the slimmest and lightest of all Mac laptops, yet it has enough power to deliver a massive Mac experience. Today, it features seventh-generation Intel Core m3, i5, and i7 processors. The MacBook 2016 should be considered a computer that shows the example of the great industrial design exercise that Apple does, they achieved a very lightweight and slim notebook with most of the features that the market needs for the usual use of a laptop.
The MacBook Air is a Macintosh laptop presented in San Francisco on January 15, 2008, during Steve Jobs' keynote in the Macworld show. The device is a powerful, compact and super lightweight laptop that responds efficiently to almost any task you want to assign, plus with an innovative design, unique to its kind. The MacBook Air has been updated several times, the latest one, which succeeds the MacBook Air 2015 is a model that has greater autonomy, a fourth-generation Intel Core processors with faster graphics, 802.11ac Wi-Fi and flash storage up to 45% faster than the previous generation. And despite these enhancements, the new MacBook Air maintains a great value for money. The Air is the perfect device for those who need a light laptop.
If none of the previous options suit you, you can choose a Mac mini, a compact and affordable computer that concentrates the possibilities of the Mac in just 19.7 cm wide, like the Mac CPU. Put a screen, a keyboard, and a mouse on it, and start to work. The new Apple Mac Mini, updated with Intel's Core series of third-generation processors and a new hybrid hard drive Fusion option, brings more speed and value to the most affordable line of Mac computers of all.